What are the 5 Basic Tastes?

5 basic tastes—sweet, sour, salty, bitter, and umami—are messages that tell us something about what we put into our mouth, so we can decide whether it should be eaten. Get to know about 5  basic tastes and learn why they matter to us.

The Function of Taste

More and more people are becoming familiar with umami, the fifth basic taste—especially with the recent “umami boom” taking place around the world. But naturally, most people don’t consider umami to be all that important. It’s a word one hears in restaurants, and possibly while studying biology in high school. But there’s more to it than that. Umami plays such a surprisingly fundamental role in human health and nutrition that it’s not an exaggeration to state that human beings couldn’t live without it.

All animals, including humans, need to eat to survive. And we can’t eat just anything. It might be possible to eat wood or dirt, but these things don’t really qualify as “food” because they don’t give us any nutrition. So how do we know what things we should eat, and what we shouldn’t? The answer is taste. Every basic taste—sweet, sour, salty, bitter, and umami—is a message that tells us something about what we put into our mouth, so we can decide whether it should be eaten.

Sweetness seems to be a marker for sugars, which gives the body fast energy, and carbohydrates, which replenish the energy stores in our body. From a nutrition point of view, both of these functions are extremely important for survival. Sugar gives the energy necessary for the fight or flight response in the presence of danger, and caloric intake prevents you from becoming malnourished, starving, and wasting away from diseases.

Sodium plays a critical role in the health of any mammal, because it regulates ion and water homeostasis in the body. And, of course, the taste marker for sodium is “salty.” The fact that saltiness is enjoyed in small quantities, but not in large quantities, might be related to its role in the body—eating too much salt at once can be dangerous, so our body responds by rejecting extremely high salty solutions.

Sour tastes help us to detect the presence of acids in our foods, and like salt, it’s usually pleasurable in small quantities, but not pleasurable in large quantities. This is why sour tastes helps us to evaluate whether food is good or bad to eat. For example, when fruit is not yet ripe, it is full of citric and other acids, and therefore tastes too sour—so we don’t eat it. The same goes for the lactic acid in milk, which increases in concentration when the milk gets too old for consumption.

Strong bitterness is a marker for toxins (poisons), and we naturally reject them to protect ourselves from their harmful effects. But in small quantities, we learn as adults to like some small amounts of bitter compounds that have a positive effect in our body such as caffeine and other plant polyphenols.

Umami is believed to be a signal for one of the most important and fundamental parts of nutrition: protein, which is found in abundance in meat, eggs, milk, and various beans. For this reason, it’s reasonable to say that early man’s affinity for umami is closely connected to hunting, the mastering of fire, and cooking, which help to provide ample and easy-to-digest protein to an entire clan or tribe. And the connection between umami and protein isn’t all that surprising, when you consider that proteins are made up of amino acids. Incidentally, umami was first identified by isolating glutamate, which led to Ajinomoto Co., Inc.’s creation of MSG. As one of the basic tastes, it’s easy to see how umami has helped humans as a species to survive for millions of years.

Discovery of umami and history of our research into amino acids

Umami, one of the five basic tastes, was identified in 1907 by a Japanese scientist. While savoring a bowl of boiled tofu in kombu dashi (a broth made from a kind of kelp), Dr. Kikunae Ikeda became convinced that there was another basic taste altogether different from sweet, salty, sour, and bitter. 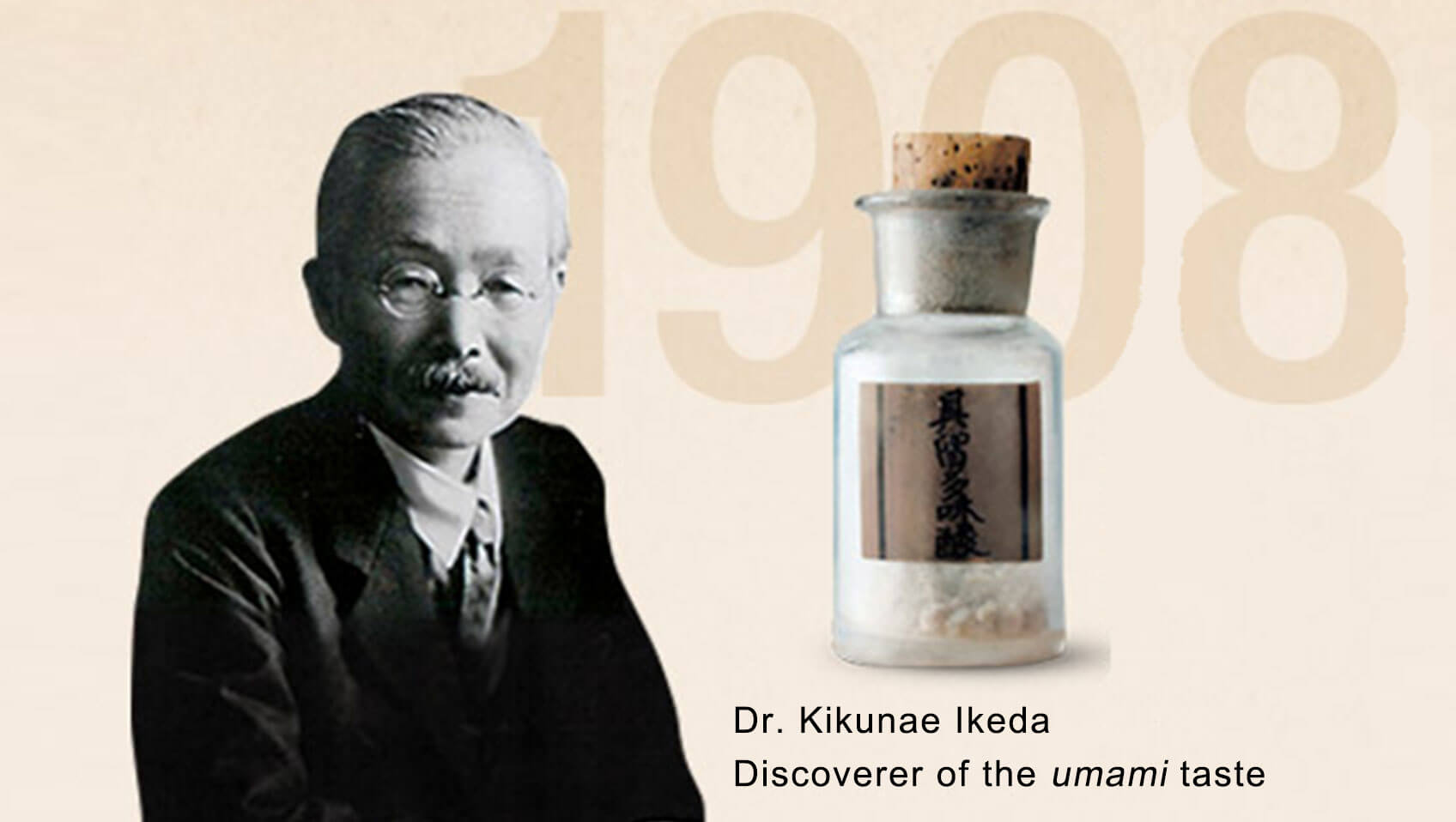 Umami was identified through a scientific analysis of kelp soup broth.

Is Kokumi the Next Taste Sensation?

Umami is used by many chefs and home cooks, and now a new taste sensation called kokumi, also discovered in Japan, is drawing attention worldwide. For example, when a soup or a stew has simmered for several hours, it takes on a richer, deeper flavor. And when cheese is allowed to mature, its flavor becomes more complex and lasting. What accounts for this form of enhanced deliciousness?

General questions about taste and umami

What is the function of taste?

Every basic taste—sweet, sour, salty, bitter, and umami— is a message that  tells us something about what we put into our mouth; we can decide whether it should be eaten.

What is the function of umami?

Umami is believed to be a signal for one of the most important and fundamental parts of nutrition: protein, which is found in abundance in meat, eggs, milk, and various beans.

What is umami and how was it discovered?

Umami was first identified by Japanese scientist Dr. Kikunae Ikeda in 1907. He found umami was made of glutamate, an amino acid that was one of the building blocks of protein.

Umami, which is also known as monosodium glutamate is one of the core fifth tastes including sweet, sour, bitter, and salty. Umami means “essence of ...

Umami is Found in Every World Cuisine

Umami (“essence of deliciousness”) may be a Japanese word, but the taste is not limited to Japanese cuisine. You can find umami in foods prepared ...

Umami plays an extremely important role in the survival of each and every individual. This is particularly true during infancy. Human gestation lasts for about ...